What follows is a transcript of a live interview that took place on December 11, 2013. To donate, click here, Bitcoin donation address at the bottom:

Matthew Keys: They call themselves the Syrian Electronic Army, a group individuals angered by what they consider is the spread of misinformation and lies by foreign news organizations.

To date they have targeted dozens of the world’s most-established media outlets as well as several American and Qatari websites. Security researchers dismiss them as a nuisance, but they have caught the attention of the FBI and the U.S. Army over the recent months.

On several occasions I’ve asked the SEA to join me for a video or audio interview. Certain security concerns have prevented that, as well as an apparent language barrier, so we agreed to do a live interview by text.

Today The Desk is having a conversation with Syrian Electronic Army hacker “Th3Pr0.”

Matthew Keys: To start, the SEA has been targeting western news organizations and other websites for the past year or so. How does the SEA choose its targets?

Th3Pr0: It’s based on their coverage, if its biased and if it silences the other opinion, then it becomes a target

Matthew Keys: Can you explain what you mean by biased? What does the SEA consider biased?

Th3Pr0: Sure. For example the latest times article where only one side was presented, just look at this and tell me it isn’t biased, they even used a zombie filter on Assad.

Th3Pr0: Yes they were blatant about it as well, but its not just about manipulating photographs, I’m just giving you some extreme examples that would have been laughable had the mainstream audience been mature enough to know what a real news source should look like. We requested from them to remove that picture but they didn’t listen.

Th3Pr0: We don’t trust media in general, every source and every claim should be inspected for factual content. No one should trust anything they read unless they can verify it from somone else they trust. However, there are some medias that are not agenda driven when it comes to Syria.

Matthew Keys: Which media outlets aren’t driven by an agenda? The SEA gave an interview to al-Mayadeen not too long ago, it was the first on-camera interview for the group, what are some others?

Th3Pr0: Say large organizations need money and a master. But some independent investigative journalists like Robert Fisk and Seymour Hersh have proven themselves without agenda over time.

Matthew Keys: The last time we had a public interview was in May, one month before the NSA dragnet was exposed by Edward Snowden. Chris has a question on that topic…

Comment from Chris: Considering the SEA’s recent violation of certain individual’s privacy rights, what is its stance on the NSA snooping? When are violations warranted and when aren’t they?

Th3Pr0: Thank you Chris for your question. On Matthew Van Dyke specifically — he is a criminal and shouldn’t be compared to the large majority of innocent people being spied on by the NSA. He is a self-admitted criminal and a mercenary and the contents of his private conversations were released in full to prevent him from claiming they were tampered with. The volume is just too great and there are too many confirmations by ex-friends who want to wash their hands of him. I don’t know if you take a look on Matthew Van Dyke leaks.. But i think you should…

Matthew Keys: Let’s go back to the surveillance issue — documents have shown that the SEA is on the radar of at least two U.S. government agencies, and I think it’s fair to assume that you’re being closely watched. It seems goal number one for those agencies — and some news organizations — is to figure out the identities of SEA members. Are you concerned about being identified one day? And to annotate that question, some media organizations like VICE and others have purported to identify SEA members, and those have been denied by the group.

Th3Pr0: We really don’t care if they know our identities, and it’s not easy to find out our identities, But i don’t think that what the documents are about. The VICE published non-SEA members names and pictures.

Matthew Keys: VICE seems pretty convinced they have it right. The SEA says otherwise. What about their report do you say they got wrong, and why do you think they’re confident that they’re right?

Th3Pr0: We’ve identified some agents that hide behind the cloak of Anonymous but in fact are working directly for the US government, much like Sabu. These agents were involved with spies inside Syria who attempted to infiltrate the SEA but failed abysmally. VICE had nothing but junk. When the time comes, these “decloakers” will themselves be decloaked.

Matthew Keys: Why not publish your identity?

Th3Pr0: Their article about the SEA idntity was updated 4-5 times with false informations everytime

Matthew Keys: It seems like publishing your identity would be the easiest way to refute claims made by VICE and other hackers. You told me in our interview in May that you weren’t really worried about being captured, so why continue to use an alias?

Th3Pr0: Because we would be beheaded by the US backed ALQaeda death squads… In a country where journalists are targeted by western funded terrorists, what makes you think that hacktivists will be spared their criminal hands and minds?

Matthew Keys: So you see yourself as a hacktivist, much like Anonymous right?

Th3Pr0: First, Anonymous is an idea, not an organization. But if you like yes, we are hacktivists. We are only doing what we are doing to show what we truly believe is the truth to the world.

Matthew Keys: What is that truth? What does the SEA feel every media organization covering the conflict there is getting wrong?

Th3Pr0: To start off with the media itself has been a weapon of war used by the enemies of Syria from the very beginning. We all heard the lies about peaceful protests even as terrorists tore the bodies of police apart and fired at them from plain sight back in 2011. These images inspired us to start the SEA and we haven’t looked back, neither has the western and gulf media backed away from their rancid lies.

Matthew Keys: That’s an interesting segue into the origins of the SEA, which I wanted to ask you about. Back in May, you and “Shadow” told me that the group had four core members — some reporting since then by the Daily Beast and The Verge seem to indicate different numbers. Today, how many core members make up the Syrian Electronic Army, and how many supporters would you say you have?

Th3Pr0: We answered this question on our website. Anyone can visit our website and click on SEA Team button. And you can say that we have thousands of supporters.

Matthew Keys: The button indicates there’s eight core members of the SEA, which would go along with what The Verge has reported in the past.

Matthew Keys: Speaking of The Verge, they kindly linked to this conversation in an article titled: “The Syrian Electronic Army is allegedly conducting a live interview right now.” To remove any doubt, I asked Th3Pr0 to upload a screen capture of his desktop — the same desktop that appears in images published on their Twitter account. 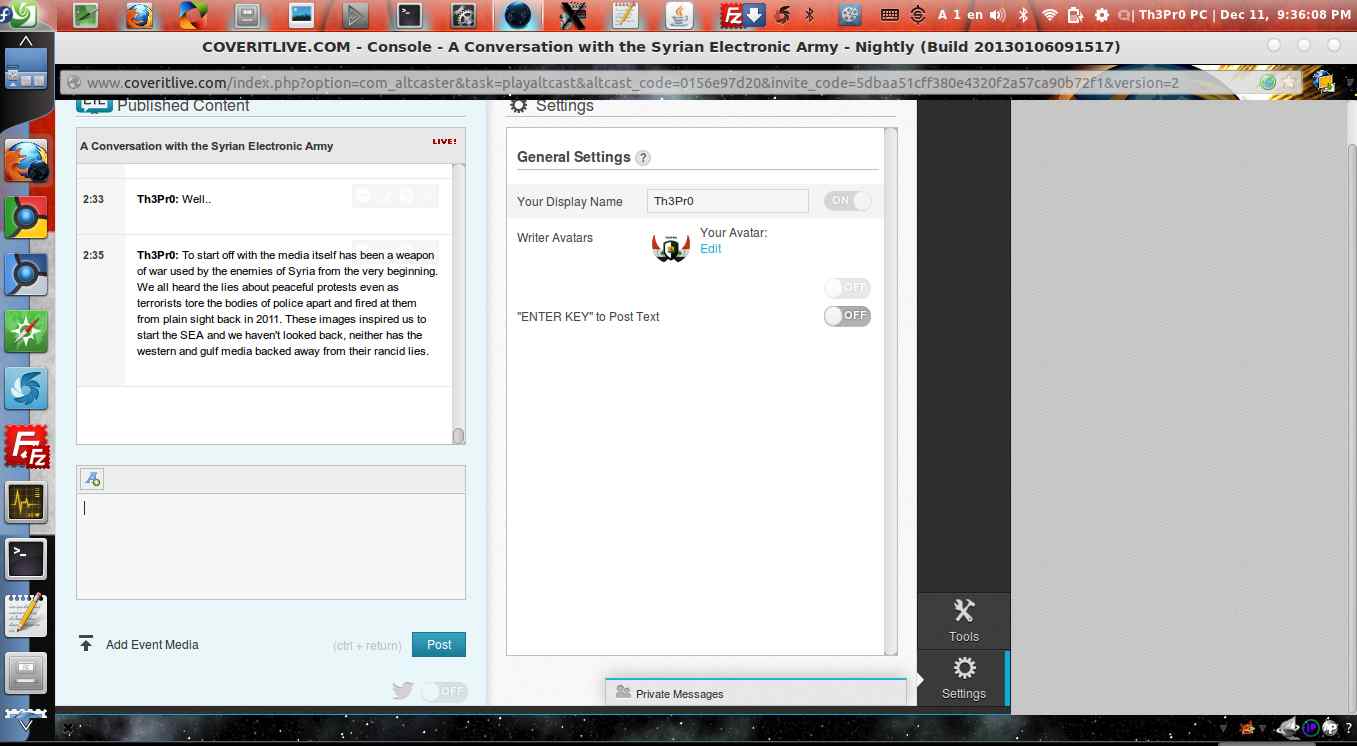 Th3Pr0: Upload your desktop too, that would be fun :P

Matthew Keys: Maybe closer to the end of our conversation.

Comment from Phil: What do you wish to accomplish with this army?

Matthew Keys: We’ve talked a little bit about the SEA’s campaign against media organizations, but what’s the ultimate goal of the SEA?

Th3Pr0: Thank you Phil for your question. In the end, we just want to stop this vicious 4th generation war on our country.

Matthew Keys: It’s safe to say that the SEA will continue its campaign until the conflict in Syria ends then?

Th3Pr0: We will try to go on as long as we are creating a positive effect, even if the media war ends the war in Syria will take a lot longer to come to a halt.

Comment from Nym: So combatting propaganda (lies) is useful in any conflict, but what counter-messages do you have, and do you see any pathway towards peace in Syria?

Th3Pr0: Thank you Nym for your question. We have delivered many counter-messages in the past, you can see our 60 minutes hack where we revealed the real source of the boston bombing being saudi arabia. Our counter-message is revealing the real hand behind terrorism. The same hand that killed Americans is today killing Syrians, the hand of the Saud family.

Matthew Keys: That seems to be more of a conspiracy theory, getting into Alex Jones territory, so moving off that…

Matthew Keys: There are numerous studies and reports that suggest the SEA is helped by the Syrian government, or has ties to the Russian or Iranian government. The SEA maintains that it receives no direct government support, correct?

Th3Pr0: Correct. And we denied any tie to the Russian or Iranian government.

Th3Pro: No, we are only normal students. In the end, we would like to send a message that Syria a Sovereign state that deserves respect, Syria is for Syrians, and that the US government or any other foreign government or person has no right to dictate to us what kind of leadership or political ideology we should choose.

Matthew Keys: Before we go, I’ll ask you the question that I ended our previous interview on: What’s next for the SEA?

Th3Pr0: We will keep going in our campaign and as i promised, There will be something exclusive for the Desk

Matthew Keys: My thanks to Th3Pr0 for joining in this conversation today.

Today’s conversation was funded out of pocket. If you’d like to help contribute toward platform and bandwidth costs, you can support The Desk with a donation here – https://www.wepay.com/donations/1187293688

Thanks for being with us today.

[To donate, click here or send via Bitcoin to address: 1GfJPxodzG5Sevktp3rgJ8o3mxM9nDNR4s ]