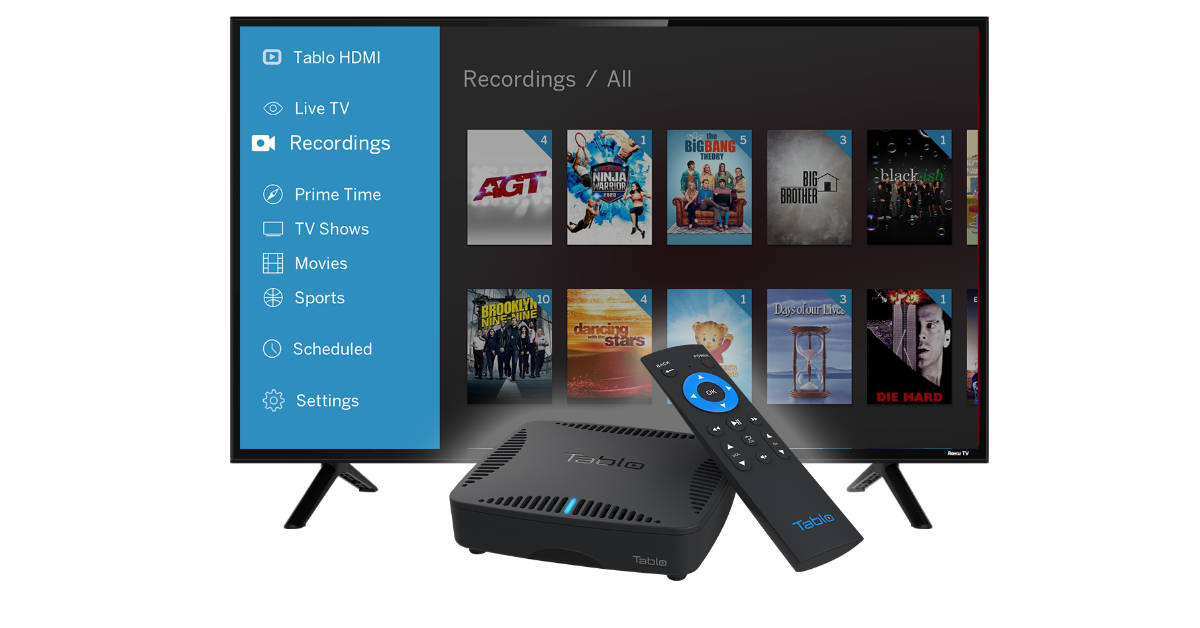 Canadian electronics company Nuvyyo has launched a new version of their popular Tablo DVRs that functions more like a traditional video recorder.

The new device, called the Tablo Dual HDMI, plugs directly into the back of a TV set like and offers the full Tablo experience without the need for a separate Roku, Apple TV, Amazon Fire or Android TV device.

“We’ve done the most 2020 thing we could think of — something so unexpected, we even surprised ourselves!” the company said in a blog post published on Tuesday. ”

The move was unexpected because Nuvyyo’s traditional line of Tablo devices have paired the experience of free, over-the-air broadcast television — the kind you’d get with an antenna — with the flexibility of viewing on a smartphone, tablet, computer or streaming TV device.

The Tablo Dual HDMI removes the extra step of needing anything more than a traditional television set to use Tablo’s DVR service. Just plug the box into the back of the TV set, hook up an antenna, set up the Tablo with the included universal remote control and you’re good to go.

“Many folks who watch TV with an antenna still prefer a more traditional DVR set up that comes with its own remote and connects directly to a single TV via HDMI,” Nuvyyo said. “Until today, these cord cutters had few options from which to choose. Thanks to the Tablo DUAL HDMI, they can finally enjoy a quality, affordable, and yet powerful DVR that meets their needs.”

The new Tablo Dual HDMI does come with a few limitations: Unlike the company’s other Internet-connected DVRs, the Tablo Dual HDMI doesn’t work with existing Tablo apps for smartphones, tablets or Apple TV. But it will allow users to stream live and recorded TV on the primary TV set and up to two secondary TV sets that use Roku, Android TV or Amazon Fire TV hardware, though the company says streaming to other sets will require a very strong Wi-Fi signal or hard-wiring the Tablo to a router via Ethernet.

But the Tablo Dual HDMI does have some advantages over its Internet-dedicated brethren: The Tablo Dual HDMI records and streams in raw MPEG-2, which is the same codec used by over-the-air broadcasters. That means the picture quality and frame rate of the video is higher compared to other Tablo devices that encode the signal in a more-compressed MPEG-4 format, though most people probably won’t be able to tell the difference.

Nuvyyo says the Tablo Dual HDMI is also better for people who travel in RVs or don’t have strong broadband Internet connections because the device only needs to be online once every two weeks to download guide data and check for firmware updates.

Beyond that, the Tablo Dual HDMI includes all of the same functions and features as the rest of the lineup: Viewers have the option of selecting between a free, limited electronic program guide or upgrading to a more-robust guide that offers 14 days of listings and additional filters for TV shows and movies. Like most of Tablo’s Internet-connected DVRs, users who buy Tablo Dual HDMI will also have to purchase a separate external hard drive, like this one made by Seagate.

Should you buy it?

The Tablo Dual HDMI makes sense for people who primarily watch free, over-the-air broadcast TV, want the option to record some of their favorite shows for later viewing and don’t mind switching inputs to watch streaming services like Netflix, Amazon Prime or Disney Plus (or for people who have TVs with these apps built-in). It’s also a great option for someone who primarily watches broadcast TV on an actual TV set and wants a traditional remote control to operate everything.

It’s also a good option for people who find technology confusing and don’t want to bother with streaming apps or services — they just want to watch free broadcast TV and occasionally record a program or two.

For large households, people who want to record lots of TV and those who want to watch on smartphones and tablets, Nuvyyo’s other line of Tablo DVR hardware are better suited, including the top-of-the-line Tablo Quad which records from up to four tuners at a single time and allows users to install an internal hard drive for a cleaner setup.

The Tablo Dual HDMI might also be limiting for people who don’t have reliable over-the-air signals near their primary TV set. Since the device plugs directly into the TV, it also has to be close to an antenna hookup, which might not be ideal for people who want to use indoor antennas. Other Tablo DVRs solve this problem, since they can be placed in other rooms of a house with a stronger signal, as long as there’s a decent Wi-Fi connection.

The Tablo Dual HDMI retails for $150 and is sold exclusively through Tablo’s website for customers in the United States and Canada.